There are plenty of fantastic walks in and around the village of Tarland.

A booklet called ‘Tarland – a great place to walk’ is available from the caravan site reception, the Spar Paper Shop and the Pharmacy in Tarland. The map can be downloaded here, but be aware it is very large.

The “Tarland Way” is a 10K (6m) cycle/walk, leading from Tarland to Aboyne 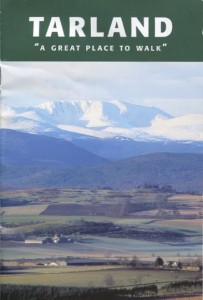 Walking and Cycling around Tarland 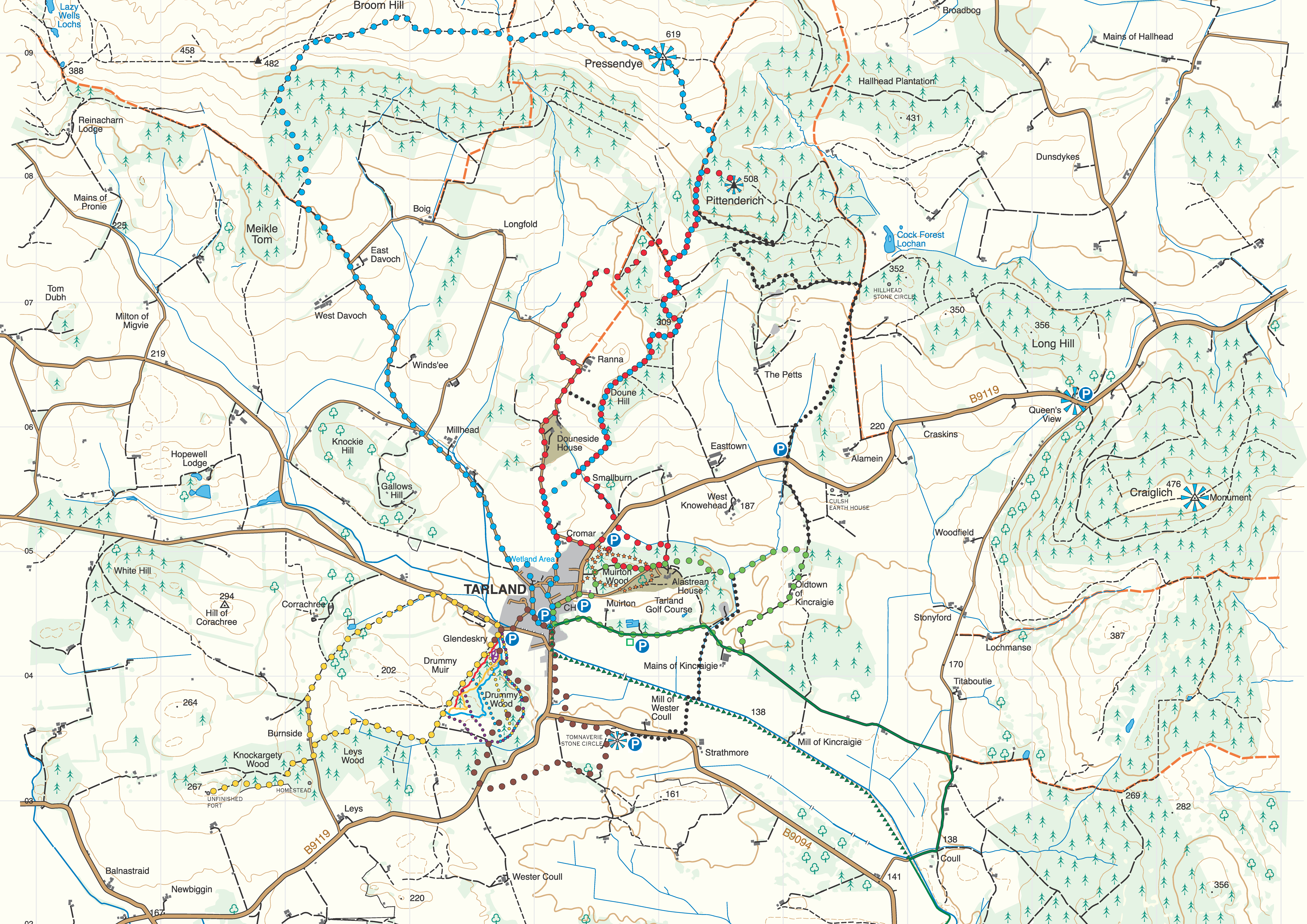 A circular walk taking you right to the top of Pressendye, with fantastic views over the Howe of Cromar and towards the Cairngorm mountains. A long (4km) fairly steep climb, with an additional 400m moderate climb later on. Mostly gravel or grass with some rough sections and 3km of tarmac. Several gates.

The high part of this route follows a major watershed with views of mostly forest and heather moorland over Deeside to the south and the richer farmland of Donside to the north. The ascent follows part of an old droving road along which cattle were driven south annually to market in Falkirk. Nowadays, most of the route is along Land-Rover tracks used to access the well-maintained grouse moors that stretch away to the north. The broad striped pattern in the  heather is the result of regular burning carried out to ensure plenty of young heather growth for grouse to feed on.

A circular route to a large cairn high above Tarland with panoramic views over the Howe of Cromar.  A long (3km) fairly steep climb mostly on firm gravel or grass. A short grass section on the descent can be quite muddy. 2km of tarmac to finish. Two gates.

Among the varied landscape features encountered on this route are the unusual shelter belts known locally as the double beeches. These provide pleasant sheltered pathways between the smooth grey trunks. The view from the cairn on top towards Aberdeen is blocked by the long smooth summit of the Hill o’ Fare, an ancient remnant of a land surface formed when Scotland lay much nearer the equator. In the other direction, the fertile Howe o’ Cromar is a huge basin in the hills with an equally ancient origin. Historically it has always been associated with cattle rearing and was for many centuries the frequent target of marauding cattle reivers (thieves).

A low-level route around Drummy Muir with a spur to Knockargety hill, the site of an ancient hill fortification with panoramic views over the Dee valley. Mostly gentle but with one 250m long fairly steep climb. One narrow section. Can be very wet and muddy after rain. One gate.

The main part of the route takes you up through Drummy Woods and back down past the policies of Corrachree House. It is a circular route with the option of an additional spur that takes you to Knockargety Hill. On the last part of the ascent of this hill, you may be able to spot the ditch and embankment that extends round three sides of the hill. It is the only evidence of an Iron Age hill fort that once occupied the site, although it may never have been completed and is now quite difficult to discern. The large dry valley to the SE of the summit may once have contained a river that pre-dated the present River Dee and once flowed through the Howe.

A pleasant walk exploring the countryside to the east of Tarland. Good for observing wildlife. Gentle except for one 250m long moderate climb. Mostly on tarmac or firm gravel with a grassy section that can get wet after rain.

This pleasant walk through woodland and farmland passes several locations of interest. After passing St Moluag’s Church, the path winds through the woods behind Alastrean House, built in 1905 as a country retreat by Lord & Lady Aberdeen and then home to Lady MacRobert and her three ill-fated sons. The route then emerges to climb steadily up a beech avenue between fields to arrive at the ‘Sun Seat’, a welcome spot for a breather to take in the splendid panoramic view of the Howe looking towards Lochnagar. The remains of a suspected stone circle lie to the left in the woods beyond, followed by Oldtown and the community orchard. The long descent back to Tarland takes you past a bird hide, curling pond and the excellent nine-hole golf course, designed by Tom Morris in 1908 and still showing remnants of earlier rig and furrow cultivation.

An interesting ramble out to Tomnaverie stone circle with views over the Howe of Cromar and to Lochnagar, returning through Drummy Wood. Mostly  gentle or moderate slopes with one short fairly steep climb. Mainly grass and earth paths with several narrow sections and several gates and stiles.

This circular walk in the centre of the Howe is a local favourite that leads you out of the village to archaeologically celebrated Tomnaverie Stone Circle and returns via Drummy Woods past the ruins of what was once a busy little community with the evocative name of Scrapehard. Whatever the season, you can enjoy the variety of vistas and natural habitats. Nearly every visitor to the recumbent stone circle at Tomnaverie remarks on its special atmosphere and its wonderful setting amid the hills and mountains that surround the Howe. Constructed over 4000 years ago, it stands testament to the creative energy of the farming community that designed and built it as one of at least six similar structures that were clearly of special significance to them within the boundaries of their local landscape.

A flat walk on a smooth gravel path. A pleasant walk through the woods around Alastrean house,  with good views south over the Howe of Cromar.

This is a delightful loop within Alastrean Woods that repays repeated visits in different seasons to take in the changing appearance of the woods and the broad landscape spread out in front of you as you overlook the golf course. This was the view that persuaded Lord & Lady Aberdeen to choose the location of the House of Cromar (now Alastrean House).

A walk around the eastern side of the village, visiting Tomnaverie stone circle and following an old drove road to a viewpoint high above the howe. Includes parts of the brown and blue routes. A long (1500m) moderate climb with a shorter (300m) fairly steep climb. Mostly gravel or grass with a field to cross. Several gates.

This route combines parts of other walks with a long climb from the heart of the Howe right up to the high slopes of Pittenderich. Part of this route was an old drove road once used for moving livestock between Cushnie and the Howe. As well as taking you near to the Culsh Earth House and the site of the Hillhead Stone circle, this varied route takes you through the Jubilee Wood, planted to celebrate the Queen’s Diamond Jubilee in 2012.

There are several paths through the woods on the south side of the village. A good place to watch out for birds and red squirrels. Gentle or moderate slopes but can be muddy. Uneven with tree roots in places.

As you follow the network of paths in the lower parts of Drummy Woods, you are passing through the fields of what was once a large agricultural settlement that occupied the site for over 1500 years until medieval times. Look out for ruins of double dykes about two metres apart crossing the paths at various points. These were lanes for livestock to move from field to field. Hidden in the broom at the top of the woods, there are at least six large hut circles, a kiln and several cairns. Two stone querns for grinding grain were found recently buried in the grass on the adjacent muirland. In more recent times, a series of crofts with cultivated fields were spread along the far side of the ridge, homes to many families still represented in the Tarland community.